The Queen of all nixies 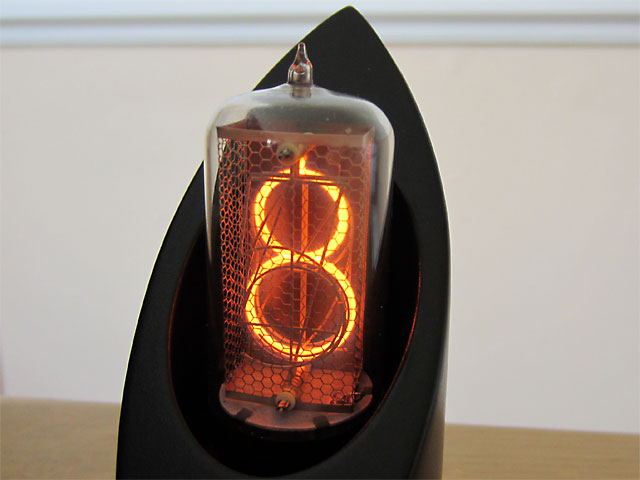 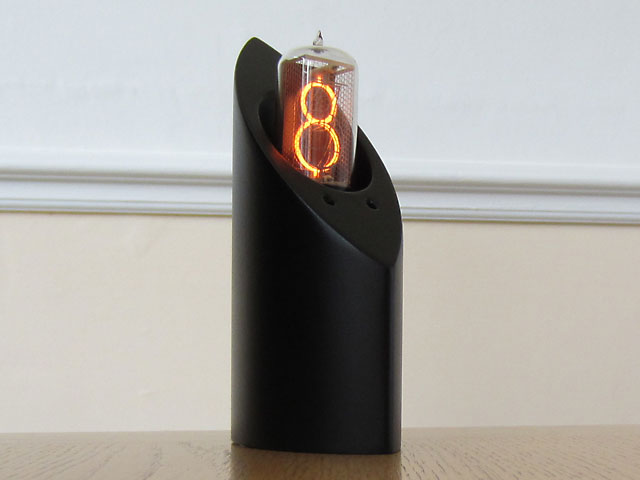 The most attractive nixie ever? Avid German nixie tube collector Dieter Wächter calls this this tube ‘The Nixie Queen’ and I see no reason to disagree with him. I make no apologies for copying his regal title. Imagine my surprise and delight when a leading UK nixie tube collector sent me not one, but two different versions of this beautiful and rare tube as a birthday present one year, complete with sockets.

It was extremely generous; the tube is so rare and hard to find that there are few pictures of it lit up anywhere on the web. The one shown here is the HIVAC version. The gold coloured fine honeycomb screen and digit shapes, coupled with the large digit size of 30mm, make this a truly lovely nixie tube to own. 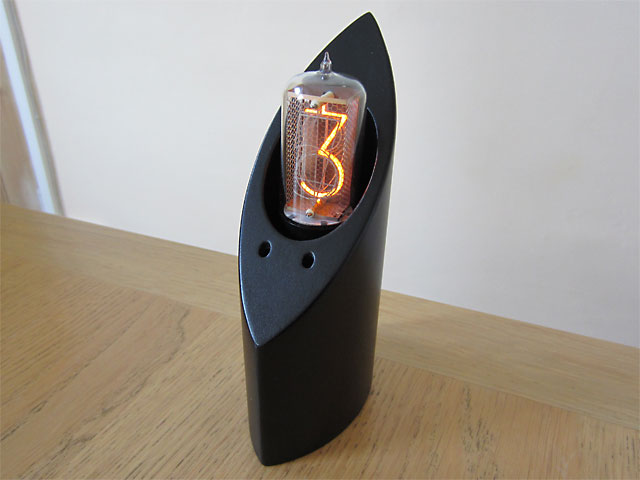 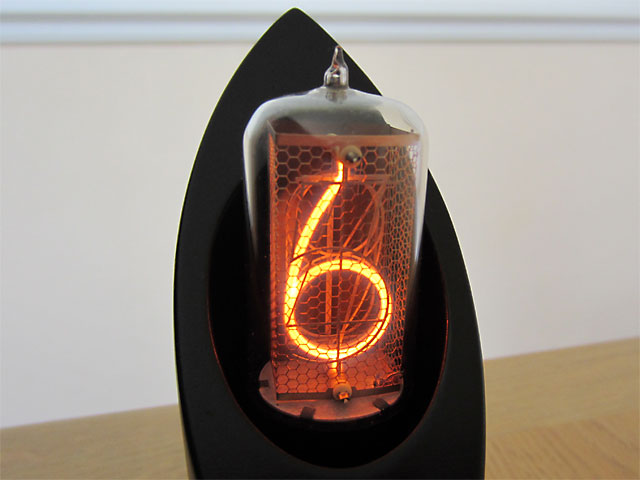 Having seen some of the huge Rodan tubes, I would not seriously wish to have them lit up in my domestic environment. The large Burroughs B7971 tubes, used at one time in the New York stock exchange, are equally intrusive. This Hivac tube is attractive and in my opinion fits well into my home without asserting itself too loudly. It’s a gem.

I started thinking how I might make an enclosure that would befit such a tube. I knew from past experience that single tube clocks are prone to being knocked over, due to their slenderness and height. I wanted to make sure, for this rare tube, that I had a solid base, and hopefully one that would not expose the tube too much if it did get knocked over. It might just survive a fall… perish the thought. The base of the clock has some fairly chunky strips of lead fitted, to further resist its being knocked over accidentally.

I like simple shapes. I also like curves. I came up with an idea and decided to make a simple 3D computer model of it, to see if I still liked it – I did. 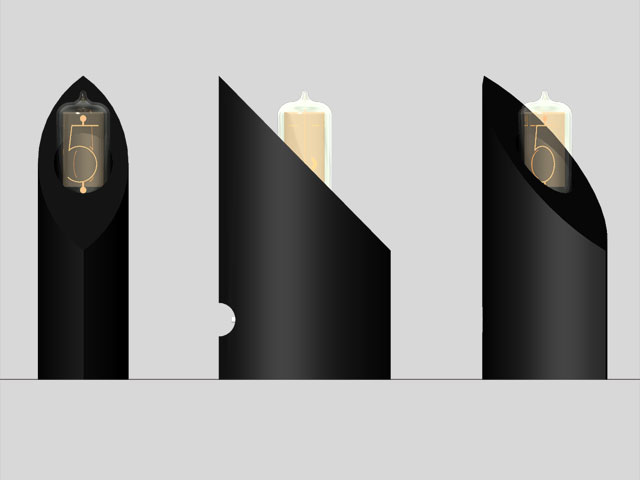 I originally thought I would place the buttons discretely in a recess at the back of the unit, but when I started to look at the circuit board design I realised it would be better to place the buttons at the front, on the sloped face. For now I have left holes through which I can set the time.

Of one thing I was sure, for this and all future clocks, the clock would have backup in case of power failure. It is tedious having to reset the clock each time it is unplugged.

I have had success using the Dallas DS3231 and DS3232 I2C chips, so it was logical to use a DS 3231 in this case, using a supercap to provide the necessary power to back the clock up.

I have been trying to use the Maxim 1771, everyone tells me how efficient it is, but for home etched boards it is very picky about layout and feedback paths, so I chickened out and used the trusty 555 timer supply which never fails me, however inelegant it might be to a purist. I am more about design and style than I am about the niceties of electronics.

In use the clock has a variety of modes which can be seen in this video:

In addition the clock can also display the month and day in other selectable modes. 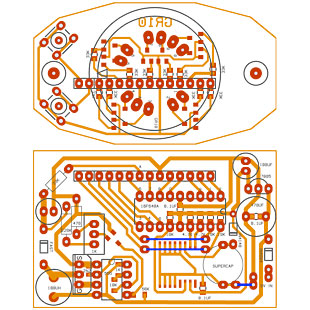 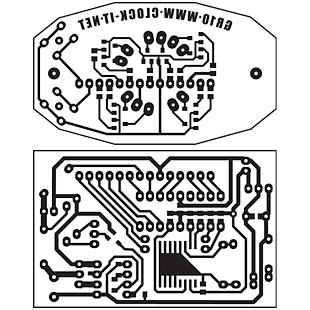 The circuit was designed directly to PCB. The whole thing was so simple that a circuit diagram was not necessary. The postscript data was exported and a board made using my trusty iron-on laser toner method.

The top board houses the tube pins, driver transistors and switches. The lower board connects via a right angled plug and socket and contains the clock chip, microcontroller and high voltage power supply.

Components were wired up, software written, bish-bosh, job done. Well perhaps it took a little longer, but no major issues that I can recall. 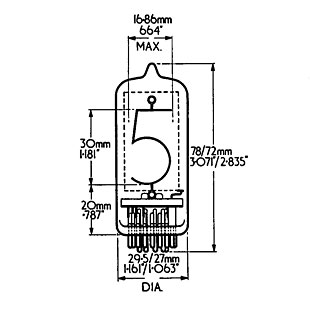 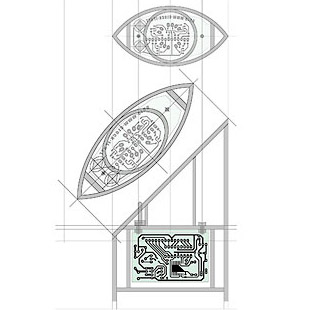 A detailed working drawing was set up, so that construction could start. Sections of suitable tubing were cut to provide the curved walls. A central tube was inserted and the slanted face covered with thick styrene.

The central hole was then routed out using a router cutter in a pillar drill and the two holes for setting the clock were drilled vertically.

An acrylic sub assembly was made up to support the electronics. Strips of lead were bolted together and fitted underneath this to provide stability. The case simply slips over the top of the sub-assembly. 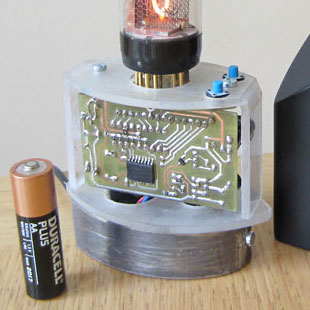 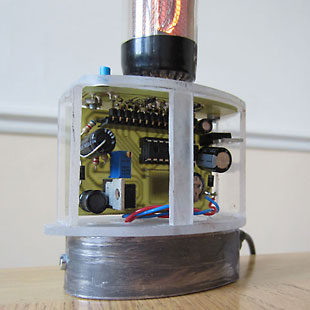 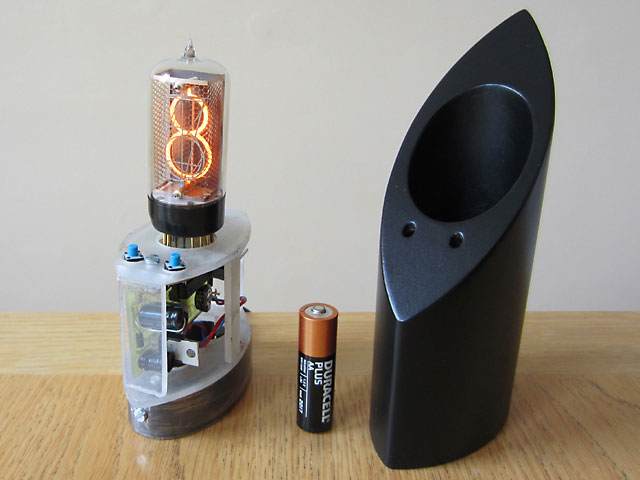 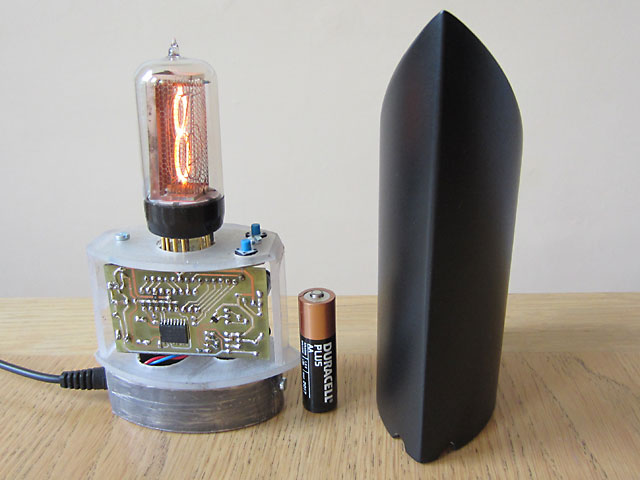