This page features a simple driver for Smartsockets. The driver is a combination of PIC microcontroller and serial EEPROM which has been designed to work with the Smartsockets devised by Chris Barron to drive Burroughs B7971 jumbo nixie tubes and other segmented displays

Smartsockets can be daisy-chained into very long strings of individually addressable characters. This driver concentrates on displaying letters as a clock and a four letter display.

For more information on Smartsockets, visit the Yahoo group at:
http://groups.yahoo.com/group/smartsockets/

What is this Smartsocket driver? 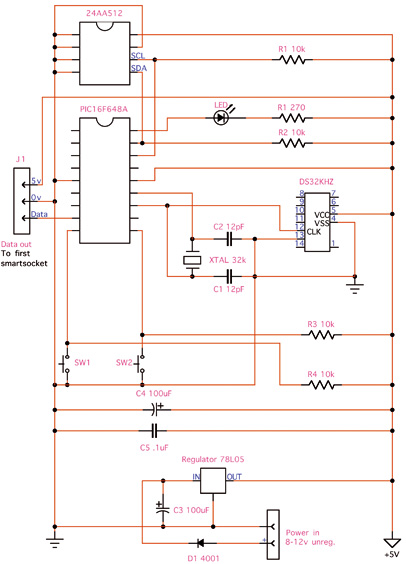 The driver is a combination of Microchip PIC microcontroller – an 18 pin 16F648a which contains the clock timing, clock editing and various modes of operation – and a Maxim I2C serial EEPROM, which contains a library of 5,644 English, or readable in English, words. These are from the most complete list I can find, which was complied by Pete Hand. Pete’s list of four letter words are taken from the official Scrabble TWL (US) and SOWPODS (International) tournament word lists, with a few proper names (eg IPOD), abbreviations (eg DEPT) and common acronyms (eg RIAA) added. The circuit Constructing the circuit board is simple. I used “Vero” stripboard to create a compact layout. Trust me, it’s simple. Fit either the Dallas DS32KHZ for accuracy or a cheap watch crystal. 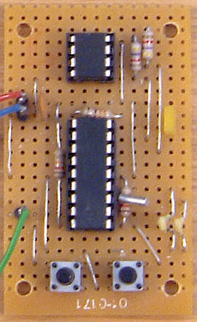 The PIC runs using its own internal 4 meg oscillator. Clock timing is derived from a 32k timing reference on the PIC’s timer1 oscillator pins. A half second pulse is output on pin 18. This may be used to indicate that the clock is running, without any tubes needing to be connected and can be used with a transistor to drive a neon colon separator.

The software contains four main operating styles. Some of these have alternatives, giving a total of nine selectable styles. All except one display both the time and words.

Edits are accessed through the two switches.

There is software adjustment of the clock should it run slightly slow or fast.

I have provided a ‘profanity’ setting which, if selected, will avoid those words likely to offend.

In addition there is a night setting which affects all styles, where the tubes will blank between 10pm at night and 8am in the morning. Or the tubes can be left on continuously.

A similar setting is available that shows only the time, or only four letter words.

Above: a scrolling style where the time scrolls across in the form of HH MM SS, followed by three static random words with decomposition and recomposition fades.

Above: a scrolling style where the time scrolls across in the form of HH MM alternating with random four letter words.

Above: a style I call slide. Characters slide into view a character at a time until the word is complete. The display then pauses before the letters slide out of view again.

Above: sequence. Words alternate with the time on a 5 second cycle. There is a delay between each letter appearing which, with the slow transitions, adds to the morphing effect between words. There are three selectable delay times.